I do this blog for fun, the wines here are some of the very few I can be bothered to write up. The cream has risen.

I had a pretty much perfect introduction to the Koltz Pagan, with my first tasting being a decadent vertical, culminating in the impressive 2012. My wine enlightenment journey continues with the new 2013 release. 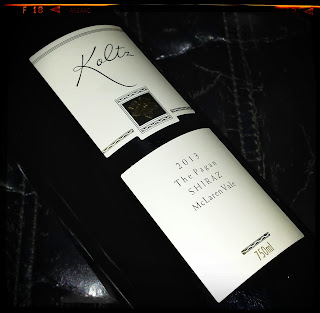 I do admit to initially having a little trouble getting my taste buds to understand the Amarone style. It tricks the palate, there's overtones of late picked but it's not cloyingly sweet. That's because it's actually picked a fair bit earlier than most Shiraz would be and then the grapes are dried before fermenting. This method concentrates the fruit flavours, but also captures the natural acid at the correct level.

If you were to pick more normally ripened Shiraz and use that technique, then the wine is going to lack the acid to be balanced. It's a temptation, but a mistake, to let grapes become over-ripe and shrivel on the vine,  the resultant wine so often initially starts out pretending to be rich and opulent, but actually ends up being cloyingly sweet after a while because they have very little acid left. The mistake is sometimes compounded in some wine factories when they add a few buckets of tartaric acid to counter the sweetness.

The acid in this Pagan is succulent, natural, and exceptionally well balanced with the fruit power.

There is a theory that the grapes will continue to develop and ripen even after they've been picked, and during the drying. I assume that they do not develop in the same way that they would if the vine were feeding them, and no doubt there are a lot of complex changes going on besides just drying out. Regardless of the science involved, the result is a wonderfully complex and individual wine.

There are very few wines I make mine mind up on after just a couple of small sips, but after sip #1 I felt an audible "oh wow" was required, and with sip #2 I've made the huge call that this is the best Pagan yet.

Black cherries, leather (also probably black), cedar, nutmeg, and a bunch of other good McVale stuff  combining to give a hard-to-put-the-glass-down mouth filling flavour bomb that reminds you that you've even got taste buds in the back of the throat. Full bodied yet impressively lithe and harmonious. It's only a baby but already clearly a gifted child, who will go on to become exceptional. If you can let it.

PS. Sealed with Diam, which is far more reliable than cork.
Posted by Gav at 2:28 AM

How I Review & Rate

I am a hard marker, when I say Recommended, I mean buy it,
Highly Recommended means buy lots!